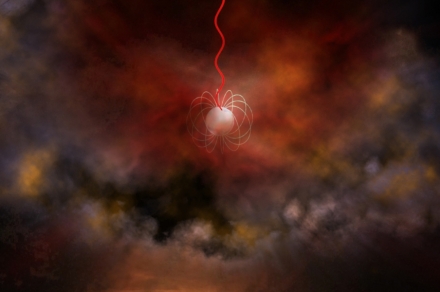 What is creating these incredibly bright radio flashes?

Exceedingly brief but incredibly bright, the strange phenomenon of Fast Radio Bursts continues to puzzle scientists. These flashes of radio energy are so bright they can travel billions of light-years and still be observable, and we still don’t know what causes them.

Astronomers recently detected only the second ever Fast Radio Burst which is highly active and repeating, while still giving out radio emissions between bursts. Most FRBs last just a few milliseconds at most, and they repeat at irregular intervals.

The source of the bursts, an object called FRB 190520, has been located in the outer edges of a dwarf galaxy that is almost 3 billion light-years away from Earth. It was first observed with the Five-hundred-meter Aperture Spherical radio Telescope (FAST) in China, then astronomers were able to pinpoint its location using data from the Very Large Array (VLA) and the Subaru Telescope.

The first-ever repeating FRB, called FRB 121102, was discovered in 2016 and garnered a lot of attention. Other repeating FRBs have been discovered, but the recently-discovered object and the first FRB are similar because of the radio emissions they continue to show between bursts.

“These characteristics make this one look a lot like the very first FRB whose position was determined — also by the VLA — back in 2016,” said one of the authors, Casey Law of Caltech, in a statement. “Now we have two like this, and that brings up some important questions.”

Astronomers still aren’t sure exactly how FRBs are produced, so it could be that there are two different processes creating repeating and non-repeating bursts. Or they could be produced by the same type of object, but these objects evolve over time to give off different bursts.

“Are those that repeat different from those that don’t? What about the persistent radio emission — is that common?” said another co-author, Kshitij Aggarwal,…