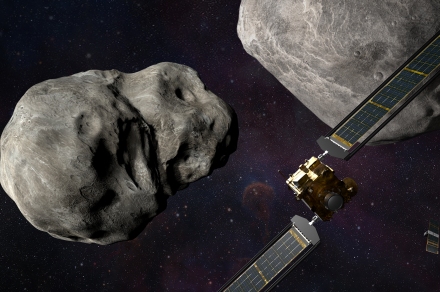 What will happen when spacecraft DART crashes into asteroid

NASA’s DART spacecraft was launched last November on a mission right out of a Hollywood movie plot: to intercept an asteroid headed toward Earth and attempt to knock it off its course. Fortunately, asteroid Dimorphos isn’t really on a collision course with our planet, though it will come close enough to be classified as a near-Earth object, but the idea is to test out the system in case we ever do find an asteroid threatening a collision with Earth.

DART will attempt to nudge the asteroid away from its current trajectory by crashing into it. No one is quite sure exactly what will happen when the spacecraft hits the asteroid, so researchers from the University of Bern in Switzerland recently simulated the impact using computer modeling.

The researchers found that unlike many assumptions that the spacecraft would leave a small impact crater in the asteroid, it could cause significant damage to the asteroid. The way it will break up depends on what the asteroid is made of, and previous assumptions had been that asteroids have a fairly solid interior. But recent asteroid sampling missions have suggested some asteroids could be more crumbly inside.

“Contrary to what one might imagine when picturing an asteroid, direct evidence from space missions like the Japanese space agency’s (JAXA) Hayabusa2 probe demonstrate that asteroids can have a very loose internal structure — similar to a pile of rubble — that is held together by gravitational interactions and small cohesive forces,” said the lead researcher, Sabina Raducan.

This means that instead of an impact crater 160 meters wide, the impact of the DART spacecraft could deform the asteroid completely and leave it almost unrecognizable. To model the impact, the researchers considered factors like how shock waves would move through the asteroid and how the material in the asteroid would be compacted by the force of the impact, which is all affected by the asteroid’s internal…