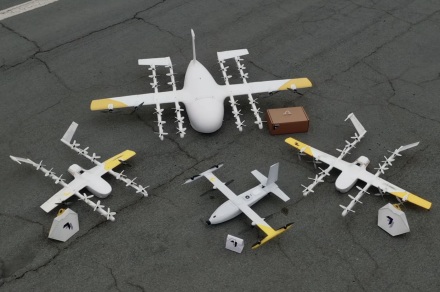 One of the leading companies in the drone delivery game has taken the wraps off several new autonomous aircraft that it aims to deploy as it continues to build out its platform.

Wing CEO Adam Woodworth, who took the reins at the Alphabet-owned company in February, spoke about why his team decided to design and build several new prototype drones for a commercial delivery service that it’s been testing in Australia, Finland, Virginia, and, more recently, in a couple of Dallas suburbs.

The team came up with the plan after considering how it might be able to improve the overall efficiency of its drone delivery system. For several years Wing has been testing a fixed-wing vertical-takeoff-and-landing aircraft, and so engineers took what they learned from that machine and applied it to the building of smaller and larger drones capable of carrying different-sized packages.

Woodworth explained the team’s thinking behind the new designs in a video shared online on Thursday, July 14.

“Here at Wing we spend a lot of time thinking about how to move packages through the sky,” Woodworth said in an accompanying blog post. “Solving the problem of on-demand delivery will always require a variety of vehicles. Just as the ideal vehicle for carrying a ton of gravel would be a dump truck rather than a sedan, the ideal aircraft to carry a bottle of medication is not the same as the best one to deliver a gallon of milk, and neither is suited to deliver a refrigerator.”

He said that the team is constantly experimenting with new designs that draw on the core elements of its current tried-and-tested drone, allowing engineers to “focus the new design work on a shorter list of new and unique tasks, knowing that the brain of the system remains the same.”

Woodworth added: “We can have tiny planes for pharmaceutical delivery, big planes for shipping fulfillment, long range aircraft for logistic flights, and dedicated hovering platforms for delivery in cities.”