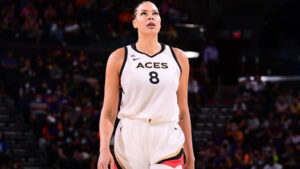 A popular WNBA player has been accused of using racial epithets.

According to ESPN, Los Angeles Sparks center Liz Cambage has been accused by an Australian newspaper of directing racist slurs toward players of the Nigerian women’s basketball team during a pre-Olympic scrimmage in Las Vegas last year.

The Sunday Telegraph reported over the weekend that two anonymous members of the Nigerian team stated that they heard Cambage call them “monkeys” during the closed-door scrimmage at the University of Nevada-Las Vegas. Another player mentioned that Cambage said, “Go back to your third-world country.”

Cambage, who at the time was playing for the Australian women’s national team, the Opals, denied the accusations on her Instagram account over the weekend.

“The incident that took place in the pre-Olympic scrimmage with the Nigerian national team was handled privately almost a year ago.

I am very disappointed and hurt by the events and accusations that have unfolded in the Australian media. The account of what took place is inaccurate and misleading.

I did not use the racial slur toward the Nigerian team that has been circulating.”

Cambage admitted there was an altercation and words were exchanged. She claimed to have been physically assaulted by one of the opposing team’s players. She acknowledged apologizing to the team the next day at dinner.

“After I unintentionally fouled a Nigerian player on court, I was then physically assaulted by this player on the sideline of my bench. I was hit in the face and pushed to the ground, but I walked away…We did not have professional referees to manage and prioritize both teams’ safety during this highly physical scrimmage.

“This is not an excuse of justification to the events that unfolded or my actions, however, I feel that a full picture of the environment that led to this outcome must be shared.”

A day after the dinner, Cambage took herself off the Australian national team, citing mental health issues. She didn’t play in the Tokyo Olympics.