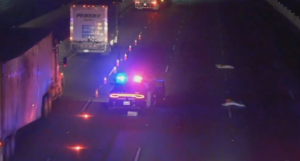 Authorities say a Landcaster, California, woman and her boyfriend were charged with child endangerment after the mother’s 7-year-old daughter fell out the back of an open window and was killed after being run over by multiple cars on the freeway.

The tragic death occurred at about 3:40 a.m. July 2 on the northbound lanes of the 5 Freeway in Santa Clarita.

The moving SUV was driven by 28-year-old Veronda Gladney, the distraught mother, while boyfriend Michael Branch, 39, was a passenger and the young girl rode unstrapped in the back.

Officers responded to a 911 call in which a witness claimed another car “had struck an unknown stationary object, which was blocking the roadway,” per a California Highway Patrol statement.

“It was determined that the unknown object was a child which had been struck by several vehicles. After initial investigations it was determined the seven-year-old female child fell out of the moving 1999 Lincoln Navigator through… an open window, and as a result sustained fatal injuries. At this time the circumstances behind how she fell out are under investigation,” read the report.

ABC7 reports that multiple witnesses claim the child was playing in the back portion of the car, hanging out of a window that “was already broken out,” and struck several times by vehicles going freeway speeds. Witnesses also said they were shaken by the traumatic incident.

“I’ve never had a kid falling out of a moving vehicle,” said officer Joshua Greengard. “I’ve been to numerous tragedies in my time, but this one is very unfortunate. It’s very sad.”

A spokesperson for the Los Angeles County District Attorney’s Office confirmed Gladney was charged with both a felony and misdemeanor count of child abuse causing death, and a felony count of vehicular manslaughter.

Branch was only charged with a child abuse misdemeanor. Both Branch and Gladney pleaded not guilty during a court hearing on Wednesday.

Los Angeles County Coroner’s office have withheld the 7-year-old’s name until her next of kin are contacted.

Branch is due at the Santa Clarita Courthouse on July 27….