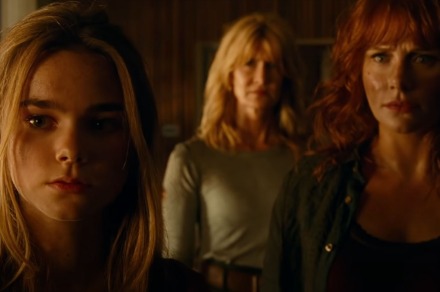 In the original Jurassic Park, Jeff Goldblum’s Ian Malcolm famously says “God creates dinosaurs, God destroys dinosaurs. God creates man, man destroys God. Man creates dinosaurs.” But what really makes the scene is the response by Laura Dern’s Dr. Ellie Sattler: “Dinosaurs eat man, woman inherits the Earth.” That particular line appears to have inspired a new featurette from Universal Pictures’ Jurassic World Dominion. At the beginning of the video, Dern talks about the unexpected impact she had as Ellie, simply because she wasn’t held back by gender roles. Ellie was both a brilliant scientist and a capable heroine.

The influence of Ellie looms large on her successor, Claire Dearing (Bryce Dallas Howard), the leading heroine of the Jurassic World films. Howard is almost giddy when she gets to talk about how influential Dern was as Ellie. And the appreciation appears to be mutual from Dern.

Two of the other major female leads from Dominion also get the chance to weigh in during the clips. Isabella Sermon’s Maisie Lockwood was introduced in Jurassic World: Fallen Kingdom. And now, Maisie is the adoptive daughter of Claire and her partner, Owen Grady (Chris Pratt). Meanwhile, DeWanda Wise’s Kayla Watts is a new character who will aid Owen and Claire despite the fact that she doesn’t know them at all. Each of these four women has their individual strengths and talents, while also maintaining their unique personas.

There are even a few glimpses of the coming team-up between the heroes of Jurassic Park and Jurassic World. And it’s a good thing, too, because if women are going to inherit the Earth, they will have to find some way to curb the dinosaurs. They are everywhere in this sequel, and the world we know is in danger of falling apart.