BREAKING NEWS
GMT-4 04:32
Home Technology Wordle is getting its own board game adaptation 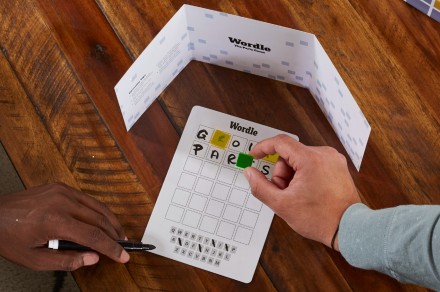 Wordle is getting its own board game adaptation

Hasbro has announced it is collaborating with The New York Times to create a Wordle: The Party Game, the board game adaptation of the uber-popular mobile word game. The gameplay is the same, but it’s being brought to players “in an all new way that’s perfect for game night with family and friends,” according to a press release.

In this version of Wordle, one player is designated as the Wordle Host in each round and writes down the secret five-letter word. The other players have to compete against each other to guess the word in six tries or less, with the winner being the player that scores the fewest points by the end of the game.

Wordle: The Party Game comes with dry-erase Wordle boards, markers, and green and yellow transparent squares so the game can be reset repeatedly instead of waiting a day like in the original mobile version. It can also be played in four modes: classic play, fast, timed, or teams.

Adam Biehl, senior vice president and general manager of Hasbro, said that Wordle permeating into the internet and pop culture since Josh Wardle released it in October 2021 prompted the company to work with The New York Times to bring the game into the real world. “Since Wordle burst onto the scene, it’s undoubtedly been a staple in social and pop culture vocabulary. We’re beyond thrilled to work with New York Times Games to bring our gaming worlds together and extend Wordle in new ways,” he said.

Jonathan Knight, head of New York Times Games, couldn’t agree more. “Wordle truly brought us all together and that’s what makes it so special. With each daily puzzle, we’re connected with friends and family through social play. At New York Times Games, we’re focused on quality crafted puzzles that everyone can experience together, which is why we’re so excited to team up with Hasbro to bring a fresh new format to the global sensation of Wordle,” he said.

Wordle: The Party Game will be released in North America in October. You can pre-order the game on its official website.