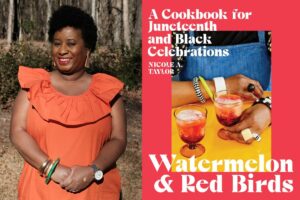 James Beard Award-nominated writer and producer Nicole A. Taylor finally brings her vision for a Juneteenth-inspired cookbook to life.

Taylor had plans to write the book for years. But after the killing of George Floyd ignited racial and political unrest. Taylor knew it was time to make the book a reality.

Her new book, Watermelon and Red Birds, was published just in time for the Juneteenth holiday. This year’s celebration marks one year since the day became an official national holiday.

Now that the country is on board with recognizing the day formerly enslaved people learned of their freedom, Taylor is helping to guide readers into the significance of the holiday and culture with the addition of delicious recipes.

“The word celebration doesn’t mean “every day,” so I wanted to make sure that readers have this canon of celebration food that the African American community will always have at the table,” Taylor told Civil Eats.

The book’s title serves as a nod to the native African fruit that became a signature in American culture while also paying homage to a Black and Indigenous proverb associating red birds with ancestral guidance. The book was broken up into multiple parts to include a list of kitchen essentials featuring a collection of BIPOC-owned brands and drink and food recipes to get groups through the summer.

“We are not a monolith. And I think I wanted to say that in the book,” Taylor said. “I wanted the recipes to say everyone does not have fried chicken at every single celebration.”

“Yes, that is a part of our tradition, but there’s always this person who’s gonna do their potato salad just a little different, and people still love it.”