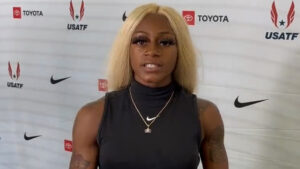 It looks like the sensitive side of Sha’Carri Richardson has emerged after her recent track loss.

According to USA Today, Richardson failed to qualify for the 200-meter final over the weekend, which ended her quest to compete for an individual medal at the USA Track and Field Outdoor Championships. While meeting with the press, the confidence and usual competitive tone she typically displays were gone and replaced with a solemn tone. She chastised the media for not being kinder to athletes and stated they deserve more respect. After making her statement, she did not take any questions from members of the press.

“I’m coming to speak, not just on my behalf but on all athletes’ behalves, that when you guys do interviews, y’all should respect athletes more,” Richardson said.

“Y’all should understand whether they’re coming from winning, whether they’re losing, whatever the case may be. Athletes deserve way more respect than when y’all just come and throw cameras into their faces.”

She then asked for more understanding from the media.

“Understand how an athlete operates, and then ask your questions. Then be more understanding of the fact that they are still human, no matter just to the fact that y’all are just trying to put something out in an article to make a dollar. Thank you.”

Sha’Carri Richardson just came through the mixed zone at USAs and asked for media to treat athletes with more respect and thoughtfulness in post-race interviews. She did not take questions. pic.twitter.com/tTF06HgIMJ

Richardson took a step closer to qualifying for the tournament by advancing to the semifinals on Saturday, even though she finished with the 10th fastest time (22.69) of four heats. At Sunday’s semifinal, she came in at fifth with a time of 22.47. She fell short of making the team.

Two weeks ago, Richardson won the 200m at the NYC Grand Prix by clocking in at an impressive 22.38.