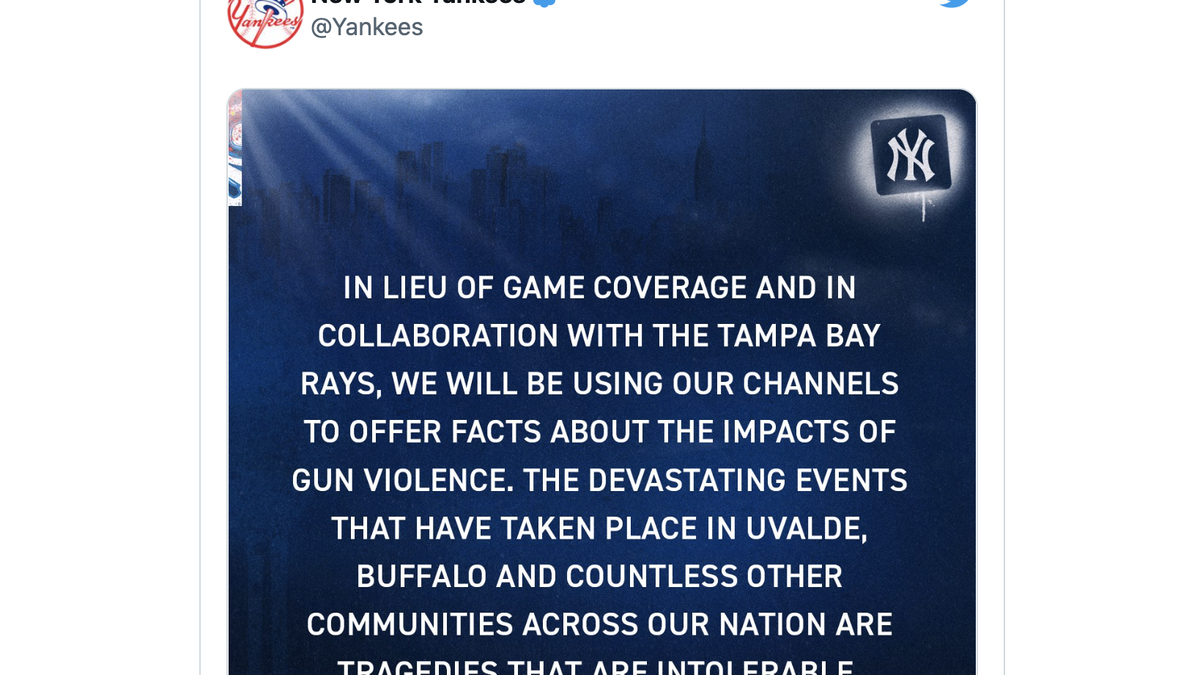 As we sit in states of grief, hopelessness, and disbelief after yet another preventable massacre of children in Uvalde, Texas, the New York Yankees shocked the nation by forgoing their usual Twitter programming during their game against the Tampa Bay Rays last night.

In place of highlights, score updates, and lineup announcements, the Yankees’ official Twitter account posted facts about gun violence in America accompanied by citations for the information. They were joined by the Rays’ account in doing so. The Rays also pledged $50,000 to a gun violence prevention organization.

Out of every team of every sport in this country, who would’ve thought that it would be the Yankees to take a stand and set a precedent for how to respond to political discourse following a senseless tragedy? This is, after all, a franchise whose singular focus is winning championships, from top to bottom, never a wasted motion. So military-like it makes its players shave and get haircuts before ever donning their precious pinstripes. The only positions it ever takes are on the diamond. And yet.

With a combined reach of more than 4 million followers, the two teams’ accounts posted statistics on topics including mass shootings, the effects of gun violence on different demographics, including women, Black people, Latinx people, and children, and the correlation between gun ownership and suicide, particularly for military veterans. It was an impactful move — albeit, one somewhat undermined by the Yankees’ ongoing employment of pitcher Aroldis Chapman, who was suspended by the league in 2016 for a domestic violence incident involving a firearm.

But for those who ask, “well, what is that team/player/organization supposed to do about it?”: When others demand decisive, impactful action from such parties in response to such horrific events, this right here is the answer to that question. They reached a large audience and interrupted regular programming so as to make the advocacy even more powerful. When people are checking their favorite team’s Twitter expecting to see…