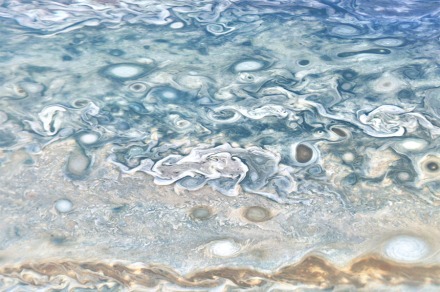 You can help analyze Juno images of Jupiter’s clouds

Some of the most stunning images of Jupiter have been captured by the Juno probe, which has been in orbit around the planet since 2016. And many of these images have investigated Jupiter’s strange atmosphere, including peering through the atmosphere’s many layers. Now, a citizen scientist project is inviting members of the public to help with this work, by identifying atmospheric features in Juno data.

The project from researchers at the University of Minnesota and NASA is called Jovian Vortex Hunter and aims to categorize the different types of clouds seen at Jupiter, in terms of their shapes and sizes. It takes data from Juno’s JunoCam imager and asks volunteers to look for specific features called atmospheric vortices. These clouds have a particular round or elliptical shape, similar to how a hurricane appears when seen from above.

An image of the 22nd orbit of the Juno spacecraft around Jupiter shows the region close to the north pole of the planet. There is a huge diversity in the colors and shapes of these vortices (hurricane-like storms). Scientists need to create a catalog of these storms in order to understand how they form. NASA/JPL-Caltech/MSSS/SwRI/Ramanakumar Sankar

By asking for help from the public, the researchers can work through the data much quicker than they could on their own. “There are so many images that it would take several years for our small team to examine all of them,” said Ramanakumar Sankar, leader of the project, in a statement. “We need help from the public to identify which images have vortices, where they are and how they appear. With the catalog of features (particularly vortices) in place, we can study the physics behind how these features form, and how they are related to the structure of the atmosphere, particularly below the clouds, where we cannot directly observe them.”

The project uses the Zooniverse platform to present images, which volunteers then scan for vortices. Once this has been done many times, the data can be used both for scientific analysis and for training an algorithm to work on feature identification as well.