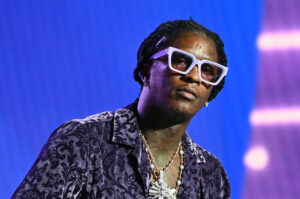 Rapper Young Thug still sits in Cobb County jail amid the YSL RICO charges he and fellow rapper Gunna were hit with and arrested for on May 9.

On Thursday his nephew and YSL artist BSlime posted a video to social media of a call between him and the famed Atlanta rapper, in which he admits to having suicidal thoughts during his time incarcerated. Thugger talks about seeking a second chance from God and his hopes to once more be reunited with his family.

“I’m just sitting here in my cell like, ‘Damn, I’m really in jail’/ God, give me another chance to show you I can prevail/ I could put my arms from wall to wall inside this tiny-a– cell,” he said.

The most concerning of the freestyle: “I tried to cry but ain’t nothing left/ I contemplated doing myself, n—-/ The most suicides deaths are in this jail/ But let’s not forget that this ain’t Hell.”

Just a few days after being taken into custody, the rapper’s attorney Brian Steel filed for an emergency bond hearing citing “inhumane” conditions at the jail.

Steel says the alleged YSL mastermind is being subject to complete isolation in a cement box with no windows, inedible “food,” and isn’t able to properly bathe or sleep in the 24-hour-lit “dungeon.” The attorney filed the request claiming Thug’s Constitutional rights were being violated, specifically exposed to cruel and unusual punishment.

Judge Ural Glanville ultimately denied the bond request, asserting that Thug was a “danger to the community” and a “flight risk.”

Despite the setback, the So Much Fun rapper continues to ask fans to sign the Protect Black Art petition in an attempt to revoke courts from citing rap lyrics as evidence.

Both Thugger and Gunna maintain that their lyrics are being used by authorities to vilify them and essentially condemn them, as the majority of prosecutors’ evidence seems to be taken from Instagram and their lyrics are “overt evidence of conspiracy.”