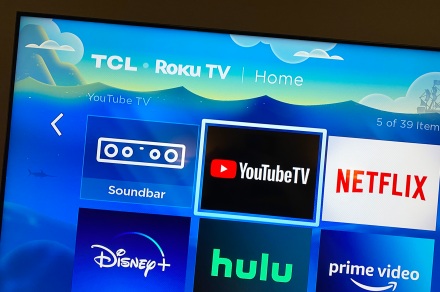 YouTube TV today announced that it’s finally rolled out support for 5.1 surround sound across three major streaming platforms, with a few more still officially waiting for the feature. Roku — the biggest of the streaming systems in the U.S. and No. 2 worldwide — Google TV, and Android TV all now should bear witness to enhanced audio. Provided, that is, that you’ve got a 5.1 setup in the first place, and that the program you’re watching is spitting out its audio in 5.1.

Those devices join the likes of smart TVs from LG, Samsung, and Vizio, as well as older-model Chromecasts, which already had support for 5.1 audio. Still waiting are Amazon Fire TV (the biggest platform in the world and No. 2 in the U.S.), Apple TV, and game consoles.

For those who don’t live and breathe audio specs, “5.1 surround sound” is a term that essentially means you’ll have audio from five directional speakers — left, right, and center channels in front of you, and two rear channels behind — and one subwoofer. That lets the audio match the video even more than the more simplistic stereo setup, in which things can move from right to left (or left to right), but not from front to back.

And it’s worth repeating the caveat from above — not everything you can watch on YouTube TV will be streamed with 5.1 audio available. Here’s how to check, if you want.

With a channel playing, click the three dots More option in player controls.
Choose the bug icon that also says Stats for nerds.
Look for the codecs section, which shows the type of audio being streamed. If you’re in 5.1 surround sound, you’ll see AC-3/EAC-3.

YouTube TV is believed to be the second-largest livestreaming service in the U.S. It last reported having “more than 3 million” subscribers in October 2020. Parent company Alphabet (basically, Google), hasn’t given a public update since then. Hulu With Live TV, meanwhile, had 4.1 million subscribers as of April 2, 2022, according to parent company Disney’s most recent earnings release.