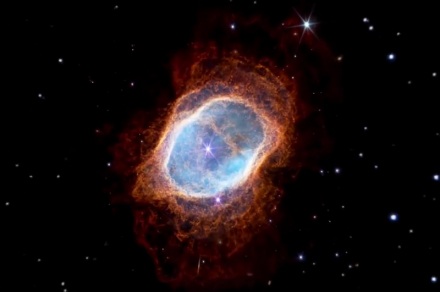 Zip through space to the stunning Southern Ring Nebula

NASA recently revealed the first high-resolution, color images from the most powerful space observatory ever built, the James Webb Space Telescope. And, peering into deep space farther than ever before, they didn’t disappoint.

A week on from that highly anticipated unveiling, the Canadian Space Agency (CSA), which along with the European Space Agency (ESA) is also part of the Webb telescope team, has posted a stunning video (below) that uses some video magic and Webb imagery to zip through space, taking us all the way to the Southern Ring Nebula, which is located 2,000 light-years from Earth.

WOW! ? This video zooms through space to reveal @nasawebb’s image of the Southern Ring Nebula, 2000 light-years from Earth. Canada’s Fine Guidance Sensor allowed the telescope to point at and focus on its target.

The Southern Ring Nebula (below), is a thing of stunning beauty, its appearance the result of a dying star throwing off layers of dust and gas.

The Webb telescope has revealed details of the Southern Ring planetary nebula that were previously hidden from astronomers. Planetary nebulae are the shells of gas and dust ejected from dying stars. Webb’s powerful infrared view brings this nebula’s second star (right image) into full view, along with exceptional structures created as the stars shape the gas and dust around them. New details like these, from the late stages of a star’s life, will help us better understand how stars evolve and transform their environments. These images also reveal a cache of distant galaxies in the background. Most of the multi-colored points of light seen here are galaxies – not stars. NASA, ESA, CSA, and STScI

CSA’s Fine Guidance Sensor (FGS), which is part of the Webb observatory setup, is enabling the telescope to point toward and focus on its numerous targets.

“To make the most out of the Webb Telescope’s incredible capabilities, it was vital to design and build the most precise guidance sensor on any space…