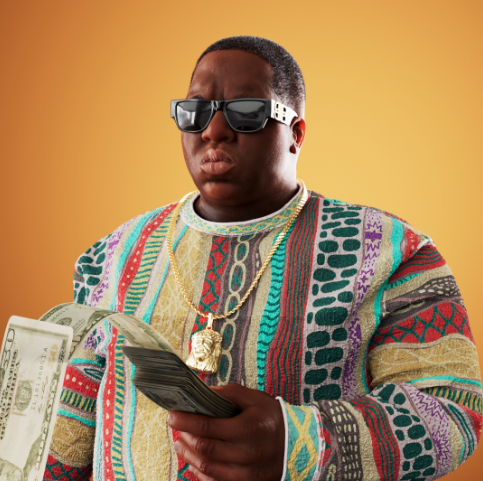 OneOf has announced Sky’s the Limit: The Notorious B.I.G. NFT Collection, a first-of-its-kind NFT in partnership with The Christopher Wallace Estate. Bringing music to Web3 in a way that only OneOf can, the platform will host a generative profile picture (PFP) NFT collection that honors and celebrates The Notorious B.I.G. as one of the most influential rappers and cultural figures of all time.

The Sky’s the Limit: The Notorious B.I.G. NFT Collection features unique 3D NFT characters inspired by his life, style and lyrics, and crucially gives each NFT holder the right to collectively license the audio of Biggie Smalls’ most famous freestyle, filmed on a street corner in Brooklyn when he was just 17. Despite its legendary status, the freestyle has never been officially released or made available for other musicians to sample and use in their own songs.  Until now.

All NFT holders automatically become part of a revolutionary new Sky’s The Limit collective, with Web3 putting fans in the driver’s seat of this piece of hip hop history.  With the approval and oversight of the collective (and estate), musicians can license and include Smalls’ iconic freestyle in their own recording. The song can be released on music streaming services with a “featuring The Notorious B.I.G.” credit in the song title.

The Sky’s the Limit: The Notorious B.I.G. NFT Collection will be available at: http://oneof.com/biggie

Today on OneOf, fans are able to sign up for the allow list.  The collection will be available to purchase on July 26.  NFT holders will also have first access to The Brook, a lifestyle, fashion, culture, music, entertainment metaverse experience launching soon with BIGGIE’s hyper realistic avatar as a character.

“We named this collection ‘Sky’s The Limit’ because we believe this is a watershed moment in NFTs where seminal artists like Biggie and their truest fans can drive culture and drive value together,” said Joshua James, OneOf Co-Founder & COO. “We’re thrilled to…