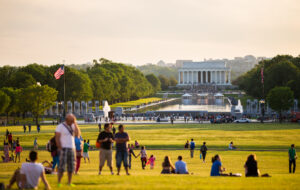 The study ranked the 10 best and five worst cities for Black entrepreneurs to start their businesses based on median income, cost of living, revenue-generation by Black-owned businesses, the city’s Black population, and how many Black residents responded to the U.S. Census.

Incfile applied the metrics to the 100 most populated cities between June and July 2022 to determine the best cities for Black entrepreneurs.

“When starting a business, the characteristics of your city can make a big difference in whether or not you’re set up for success,” Incfile CEO Dustin Ray said in a statement to Technical.ly.

“Of the top 100 most populated cities in the U.S., D.C. came out on top. [It] ranked high for average annual revenue for Black-owned businesses and medium income of residents.”

Black business owners suffered during the COVID-19 pandemic, falling 40% in April 2020, a larger decline than any other racial group. Black entrepreneurs showed their determination, fearlessness, and resiliency and today, the number of Black businesses is 30% higher than pre-pandemic levels.

The rest of the top five are St. Louis; Indianapolis; Rochester, New York; and Cleveland.

St. Louis is one of 16 cities Incfile researched where Black-owned businesses make over $100,000 per year. Indianapolis doesn’t have the Black population others on this list do, but its low cost of living and high average revenue for Black-owned businesses makes it an attractive spot for Black entrepreneurs. Meanwhile, Rochester is in the top 20 in Black population and the top five for cost of living.